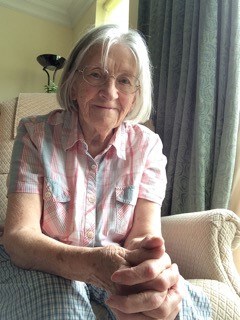 “I have worn hearing aids for over 50 years. My first one was a Medresco hearing aid from the National Health Service, named after the Medical Research Council of the NHS. It was as big as cigarette box, and had a length of wire to the ear mould. It had a clip to fix on a belt or a pocket. I heard every crackle of my clothing, paper, cutlery, traffic, wind, body sounds, children screaming, whistling, clopping shoe heels, and other dreadful noises, but I could’t hear voices properly.
Through the years I graduated to buying the latest models with my hard earned cash. They continued to whistle and pick up unwanted sounds. It was not easy living in a speech world and scarcely hearing speech.
Slowly but surely hearing aids did improve, and in 2001 I bought a pair of Widex Senso P37 BTE (behind the ear). These were before digital aids – and were the best I ever had. I could almost forget I was deaf. No wind or background interference, After wearing them from morn till night for 10 years, they began to die, and I realised they needed replacing.
I was horrified to be told that they were no longer manufactured – in fact no analogue hearing aids were available any more. I got a wonderful sounding brochure about the modern digital aids. As I had taught myself to do lots of creative things on my new computer – digital certainly sounded the way to go.
My previous audiologist offered me a pair of Widex S4 Super 440 BTE digital to try out. I wore them for a couple of weeks, trying out all the bells and whistles that they had a-plenty. I was disappointed that I couldn’t hear my iPhone clearly, in fact I couldn’t hear much very clearly, but somehow I imagined that I would get used to them, so I bought them!
I never did get used to them – my head became full of awful noises and vibrations. I literally passed out twice as the programmes were adjusting automatically. The aids were returned to Widex who said they had been set too high, so they were set lower, and constantly adjusted until most of the bells and whistles were totally cut off, leaving just one programme supposedly mimicking analogue aids. The only thing that worked reasonably well was the loop gadget to hear TV, but even then I could not hear TV without reading subtitles.
I felt really deaf when I wore them, and tried to avoid social events and conversations.
I managed to wear the old analogues for another 18 months, but finally I had to wear the digitals full time.

I moved to Harrogate, and wanted to hide away from speech events, and just be reclusive and deaf, whilst socialising via the computer.
I chanced to Google for analogue hearing aids Harrogate, with no hope of a positive response.
WOW – I was WRONG. I found R.J DONNAN HEARING CARE LTD. had a branch in Knaresborough. I sussed out the venue and made an appointment to see Robert. Yes he did have ANALOGUE HEARING AIDS.
He was amazing at understanding my problem. I had home visits, clinic visits and emails so he was very much in touch.
First I tried some digital aids that he thought may suit me, but I still felt the strange head noises and weird vibrations same as I already had. So then he brought a pair of analogue UNITRON US80 PPLA.
The minute I put them in my ears I could feel the difference. My head was clearer, and voices clearer. I bought them early in June 2016. Robert also gave me a Humantechnik communication system to use with the TV. This was brilliant initially, then the receiver refused to charge. Rob sent some new rechargeable batteries to sort the problem. It worked for a while, but then stopped charging again, so although this was a very kind gesture from Rob, I have had to stop using it.
So now nearly 2 months later I am very pleased with the analogues – I don’t hear everything, but what I do hear is clearer, and my head is clearer.
I even wonder whether those digital aids worsened my hearing.
Anyway to solve the TV problem, I am wearing the digital with TV connector just for that purpose – then changing to the Unitron analogue. One time I forgot to change them before going shopping. I was very aware of the cursed digital as I did my shopping – felt dizzy, and full of noise.
There is no doubt at all that Rob has done me a great service by supplying and adjusting these analogue aids” Margaret Hockney 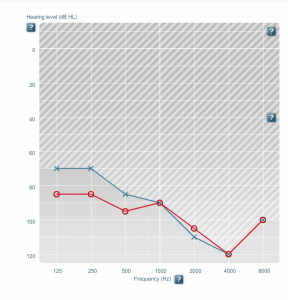